For those unaware, LPM is a fancy name for "I am going to use OLS even though the dependent variable is binary, but I want to feel special!"

The relative merits of each is important and should be studied. And, for the uninitiated, I refer you to lengthy Twitter battles and excellent blog posts elsewhere. But, here, I want to advocate that economists (and perhaps other disciplines, but perhaps they do already) should add to their toolbox OTHER estimators of binary choice models! 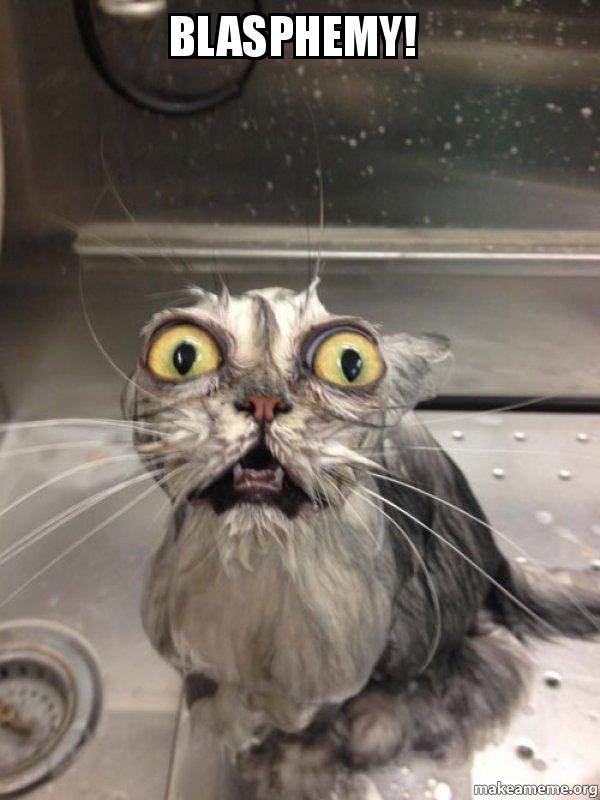 Admittedly, I am no expert, but think of the fun new Twitter battles this could create. To understand these other models and why they might be useful, let's refresh our memory on the classics: LPM, probit, and logit.

The LPM posits that the data-generating process (DGP) is

The marginal effect of x is constant and given by b. This is what leads to one of the shortcomings of LPM; namely, predicted probabilities can lie outside the unit interval.

The probit and logit models posit that the DGP is

where F() is the standard normal cumulative distribution function (CDF) in a probit model and the logistic CDF in a logit model. The use of a CDF for the choice of F() ensures that the probabilities are contained in the unit interval. The marginal effect of a unit change in one of the covariates, x_j, is given by

In contrast to the LPM, the marginal effects - which are scaled versions of b - are necessarily observation-specific; they vary with the full covariate vector, x. This is well-known.

What else? We also know that F'(xb) is symmetric which implies that the marginal effects are symmetric. For example, the effect of a unit change in x_j is identical when xb = -c and xb = c for all choices of c.  Thus, these models restrict the marginal effects to be identical for observations with initial probabilities of y being one equal to p and 1-p for all p. Again, this is a typically overlooked behavior restriction.

So, what can we do if we don't wish to choose a model where the marginal effects are constant across observations (LPM) or a priori restricted to be maximized at initial probabilities of one-half and symmetric away from one-half (probit and logit)?

We move beyond LPM, probit, and logit by choosing a different functional form for F() that does not impose symmetry and whose derivative is not necessarily maximized when F(xb)=0.5. Two options are available in - gasp! - Stata. The complementary log-log (cloglog) model and the skewed logit (aka scobit) model (Nagler 1994). How can you go wrong with a name like scobit?

The cloglog model sets F(xb) = 1 - exp[-exp(xb)]. The scobit is sort of like a Box-Cox model; it adds an extra parameter into the model to be estimated that allows the data to inform us about the choice of F(). Here, F(xb) = 1 - [1+exp(xb)]^(-a), where a is to be estimated along with b. As shown below, when a=1 the scobit reduces to the usual logit model. For other values, we can get asymmetric and funky shapes for F(). 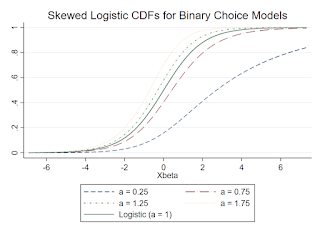 Some of these alternative models are used more frequently in a literature referred to as "rare events." These refer to modeling a binary outcome when, without loss in generality, 1s are very rare. Examples might include modeling bankruptcies by firms or individuals or infant mortality in a developed country. However, given the potential for these models to relax the behavioral restrictions embedded in the LPM, probit, and logit models, it seems they ought to have a more prominent place in many other contexts as well.