May 16, 2020
To say that difference-in-differences (DID) as a strategy to estimate causal effects has seen a resurgence in the past decade would be an understatement. A search for the term on Google Scholar produces nearly 2,000 hits. In 2020. About 22,000 since 2010. 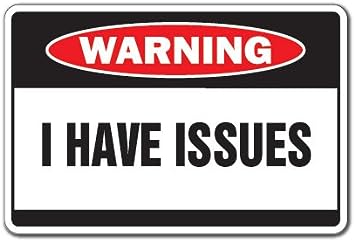 However, if one is going to pursue the DID strategy to examine the causal effect of a policy change or other intervention, then one could dare to be at least a bit different by channeling one's inner David Bowie. Sing it with me:
"Ch-ch-ch-ch-changes
Turn and face the strange
Ch-ch-changes
Don't want to be a richer man
Ch-ch-ch-ch-changes
Turn and face the strange
Ch-ch-changes
There's gonna have to be a different man"
Inspired by the wonderful Scott Cunningham's appeal to music lyrics to motivate econometric methods in Causal Inference: The Mixtape [available here on Amazon for the low, introductory price of only $35, while supplies last!], David Bowie's lyrics are a perfect motivator for an alternative to DID that should, perhaps, be utilized much more than it is.
The alternative is Athey & Imben's (2006) so-called changes-in-changes estimator. And, while the intuition behind the estimator is straightforward, it does require us to take David Bowie seriously. First, the estimator is based on ch-ch-ch-ch-changes as opposed to diff-diff-diff-differences. Although, truth be told, this is mostly semantics. I think they just needed a new name to differentiate their approach. But, alas, it works with the lyrics, so let me have this one. Second, the estimator requires us to be a different man (or woman or non-binary individual) because it focuses on a different parameter of interest; one that is richer even if we don't wanna be that guy. And, finally, the estimator asks us to turn and face the strange because the estimator is initially a bit counter-intuitive.

Check out that hair! This must be a great estimator. In the future, I need to find an estimator inspired by a Flock of Seagulls song. 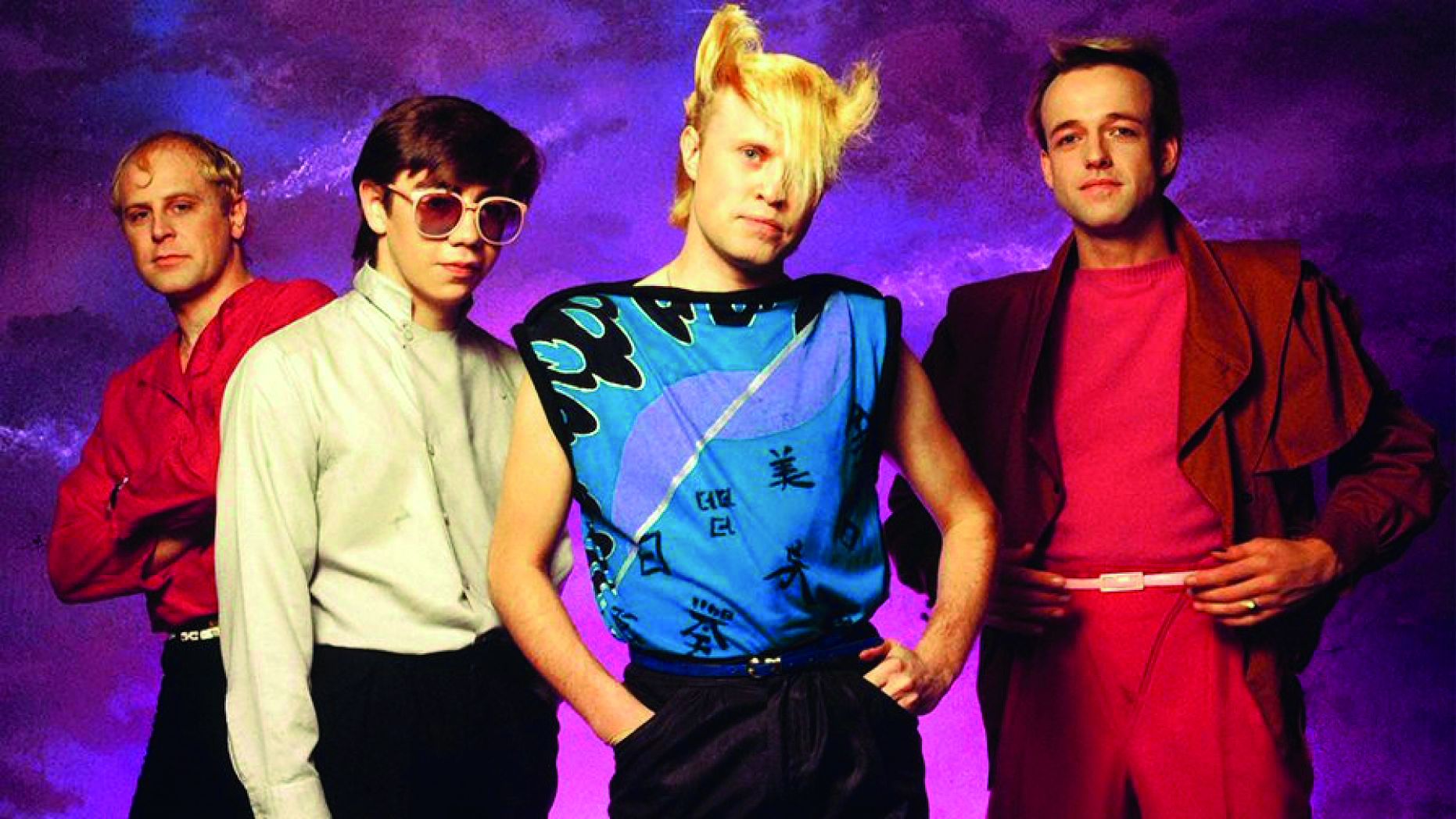 Anyway, back to Athey & Imbens (2006; hereafter AI). AI's approach begins by changing the parameter of interest from traditional DID. As is perhaps well known, with heterogeneous treatment effects, traditional DID sets out to estimate the average treatment effect on the treated (ATT). Of course, as an astute reader of this blog, you are well aware that I warned  in a previous post about the mistakes that may ensue when one focuses on the average. In the present context, when distributional concerns are important and one hypothesizes that the treatment may differentially affect units across the outcome distribution, then the ATT may not be overly informative.
The parameter of interest in AI is the quantile treatment effect on the treated (QTT). With the usual binary treatment, the QTT is the difference between the two potential outcome distributions for the treatment units at a particular quantile, q. If you are not used to thinking about quantiles, just replace "quantile" with "median" and think about the difference at this particular quantile. But, in practice, we can define the QTT at any quantile, q, from 0.01, ..., 0.99. The QTT is Bowie's different man.

The QTT is also the richer man because we learn much more than just the difference in expected values of the two potential outcomes for the treatment units.
Prior to continuing, it is important to note that the QTT does not reflect the treatment effect for any particular unit unless the assumption of rank preservation holds. Rank preservation is the very strong -- implausible! -- assumption that each agent's rank is identical in each of the potential outcome distributions. For example, if the treatment is a training program and the outcome is future wages, then rank preservation implies that if an agent is at, say, the 43rd percentile of the potential wage distribution without training, then the agent is also at the 43rd percentile of the potential wage distribution with training.
Absent the rank preservation assumption, the interpretation of the QTT is simply the difference in quantiles across two marginal distributions, one for the treatment units with the treatment and one for the treatment units in the counterfactual world where they are untreated. In my view, this does not diminish the usefulness of the QTT as a policy parameter. Likewise, the ATT does not necessarily reflect the treatment effect for any particular agent either. Again, refer to my previous post linked above on the fallacy of the average man.
Now that we know the parameter AI are after, how do we estimate it? AI start with the now all-to-familiar 2x2 DID  design. The researcher has two periods of data, t = 0,1. No units are treated in the initial period. In the terminal period, some units have received the treatment. The treatment group is denoted by D = 1, the control group by D = 0. Now, things start to get a little intense.

where I am using θ instead of q to denote the quantile. If your freaking out, just replace θ with the median and the above expression is simply the difference in the median outcome for the treatment units in period 1 with and without the treatment.
Given a random sample, the four distributions can all be estimated (nonparametrically) using the empirical cumulative distribution functions (ECDFs). Note, nonparametric and ECDF may be scary sounding, but these fancy words just mean plot the CDF of your data. No heavy lifting required. You can do this in Stata using -cumul- or -cdfplot-.
The counterfactual distribution, F_Y(0),11, cannot be directly observed in the data. So, estimation boils down to estimating the counterfactual CDF for the treatment units in period 1. In DID, estimation boils down to estimating the expected value of this counterfactual distribution. Here, we want to learn each of the quantiles of this distribution.

This is where we need to listen to Bowie again and turn and face the strange. AI make the convincing argument that the estimator just described, which AI refer to as quantile difference-in-differences (QDID), relies on a set of inferior assumptions compared to an alternative estimator they refer to as quantile changes-in-changes (QCIC). Ahhhh, Bowie.
While QCIC is strange at first glance, there are two important things to note. First, it is no more difficult to compute than QDID. Second, it makes sense intuitively once we think about it. 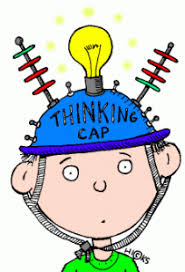 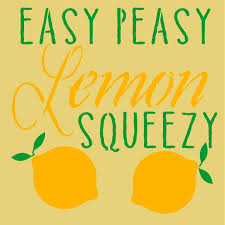 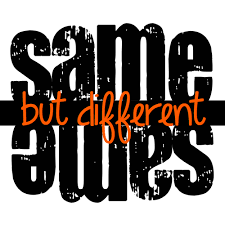 In contrast, QDID assumes parallel trends holds between treatment and control units at the same quantile, but potentially radically different values of the outcome in the pretreatment period. Since the quantile itself likely has no economic effect, it is much more likely that units with identical outcomes would follow a parallel trend in the absence of treatment, rather than units at identical quantiles. Finding a quantile's doppelgänger at a different quantile reminds me of another unlikely duo that were nevertheless a perfect match.

If you want to see AI's estimator in action, here is the picture that compares QDID and QCIC. It takes a while to process and I won't walk you through it here (since this post is already too long!), but if you sit with it, I promise it will make sense. 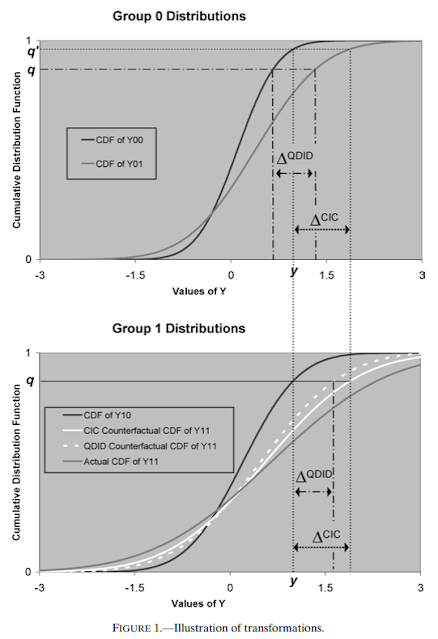 Formally, the estimator is written as follows. 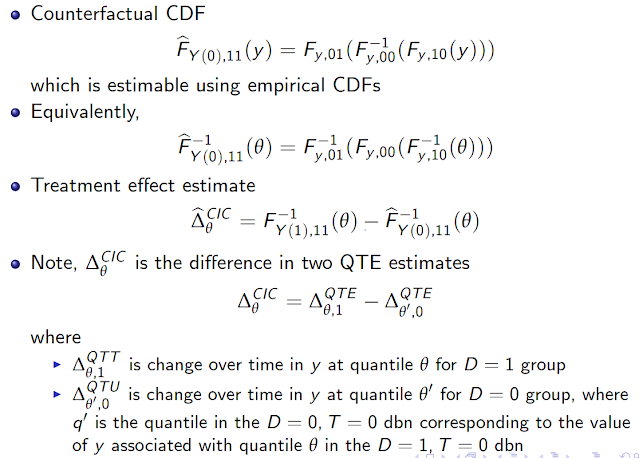 It looks messy, but it is just a function of basic statistics! And, once again, Stata to the rescue. The command -cic- is available. There actually appear to be two versions floating around by different authors. The version by Blaise Melly is based on Melly & Santangelo (2015) and allows one to also control for covariates in the model. Their code is available here. 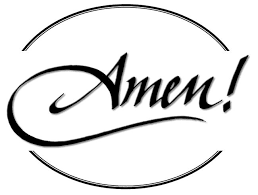 This post started by referencing Google Scholar. I will end that way as well. Citations of AI (while not too shabby) are dwarfed by citations to DID, and seem to be primarily by other econometric theory papers. In my view, not only does AI's approach provide a more complete analysis of the treatment, but it offers a way to distinguish yourself from the crowd.

As Bowie said, it's all about the changes. Perhaps we will see a change in the usage of AI in applied research moving forward. Perhaps there will even someday be a paper by Pedro Sant'Anna and Brant Callaway about staggered QCIC.

UPDATE (5.16.2020)
Thanks to Wei Yang Tham for pointing out that AI is also available in the -qtte- package in R here.
Thanks also to Vitor Possebom (who must spend all his time reading!) for pointing out a related paper by Bonhomme & Sauder (2011). Of course, it makes use of imaginary numbers and I have strict rules against relying on made-up math. As I said above, I have issues.
References
Athey, S. and G.W. Imbens (2006), "Identification and Inference in Nonlinear Difference-In-Differences Models," Econometrica, 74, 431-497
Bonhomme, S. and U. Sauder (2011), "Recovering Distributions in Difference-in-Differences Models: A Comparison of Selective and Comprehensive Schooling," Review of Economics and Statistics, 93(2), 479-494
Melly, B. and G. Santangelo (2015), "The Changes-in-Changes Model with Covariates," unpublished manuscript.