IV with a Mismeasured Binary Covariate

where D is a binary variable and b is the coeff of interest. Suppose D is endogenous, but we have a valid instrument, z. IV is consistent and should do well in large samples if z is strong.

But what if D is also measured with error? I.e., what if the true model is

where D* is the true D, but we only observe D (D not equal D* for some i)? That valid instrument, z, we had? Now, it's not quite as useful. Why?

A very good reference is Black et al. (2000). Note, this argument applies to any bounded variable; D* need not be binary. E.g., if D* represents a percentage, then it is bounded on the unit interval. If the bounds are relevant, same issue arises.

So, is this a big deal? Most applied people would answer a question about this: "ME is not a big deal in this context. If it is exists, it's not severe enough to matter." Perhaps. Perhaps not. I performed some simulations. 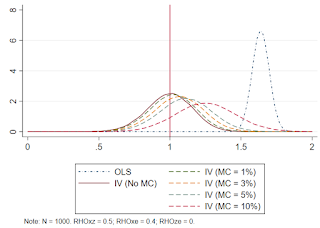 In an old paper of mine, I cite several instances where 10+% misclassifcation has been documented in commonly analyzed treatments (e.g., training, education, union status around 5%.

Not surprisingly, if the IV is weak, then results are even worse. 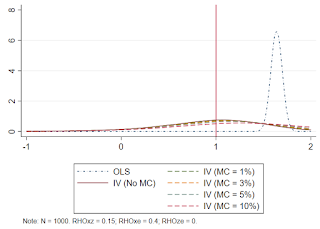 So, what do we do? There are a few solutions out there, many that rely on computing bounds. But, definitely an important area for future work! One very recent contribution to this literature is by my great friend, Rusty Tchernis and co-authors.